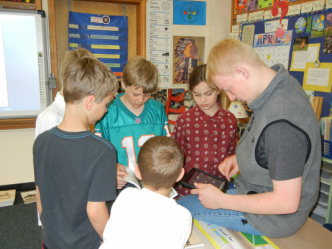 High School students met face-to-face with the third graders.  This time, however, the venue was the third grade room at Lewis & Clark Elementary School.  Students were introduced to the actual project they will be working on and a description of the final project, the historical documentary, was explained.

Students also discovered what all of the "mystery people" had in common.  All of these people were children in 1883 when Missoula, Montana officially became a town.  They will use primary sources and oral interviews to reconstruct life in Missoula County in the late 19th century through the eyes of children living at that time.  In performing their research, they will visit local historic sites, examine photos, family histories, letters and diaries; and conduct interviews.

After students conduct their research, they will analyze, organize, and present what they have learned to other students, parents, members of the community through the production of short video documentaries of each person they research.

Following are images from this visit while students were research three questions. Students used iPads and books to research the answers to these questions.
Finally students looked to see what the people had in common with these dates.

Students discovered in their research that one thing that all of the people had in common was that they were all children during 1883, when Missoula, got it's first Mayor and when the first Northern Pacific passenger train came to Missoula.

Students were given a letter to take home explaining the project.  They were also given the specifications for the historical documentary they will be creating.